The minute we first stepped onboard ship, Cuba was ‘in the air’ with a band playing Cuban style music in the atrium.  We then proceeded up to the lunch buffet, where Cuban paella was being served.  I was very excited to begin our voyage to Cuba and was also pleased to see that Royal Caribbean was helping to set the mood for the trip!

The next morning, during our full day at sea, an introduction to Cuba lecture was featured in the main show lounge at 10am. 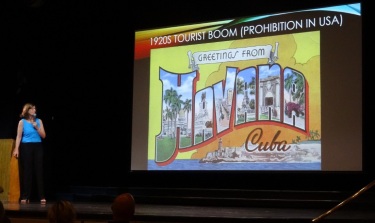 Proving that this was to be no ordinary Caribbean cruise, the lecture was enthuisastically attended and the lounge was totally full.  I was thinking that a lecture on almost any topic on a cruise to St Thomas would be lucky to get 20 people; again proving that this was no ordinary Caribbean cruise!  Our speaker was Mary Clark Coffey, a professor from the northeast U.S.  She easily guided us through Cuba’s early trade history, sugar production, popularity with mob bosses, and of course, the turbulent political times.   Then the different areas of Havana were highlighted and with each photo shown, it became more exciting to realize that “we’ll there tomorrow”!

(this is Part 2 in my series of Havana cruise posts; Part 3 follows tomorrow)

4 responses to “Voyage to Cuba”